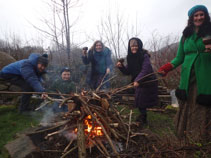 On the first weekend of February this year we celebrated our wonderful communal apple trees at Red Acre with our first ever Apple Tree Wassail!

A Wassail, you say – what’s that then?

There are two distinct variations of wassailing. One involves groups of merrymakers going from one house to another, wassail bowl in hand, singing traditional songs and generally spreading fun and good wishes. This is now recognised as carolling, where groups of people go from door-to-door singing Christmas carols.

The other form of wassailing is generally practiced in the countryside, particularly in fruit growing regions, where it is the trees that are blessed.’

Derived from the Anglo-Saxon “waes hael”, the term Wassail means “to your health” or “be well”. Wassailing is the ancient custom of visiting orchards and singing to the trees to promote a bountiful harvest for the coming year.

So what exactly does a Wassail entail?

Well, as a folk custom it can be quite variable, differing from region to region, but there are some activities that tend to always occur as part of the celebration ceremony including:

Certainly not. Not only do we have a superb collection of apple trees on site at Red Acre, from which we made some delicious apple juice (and subsequently some cider no doubt!) at our Apple Pressing Day (this years will be on Saturday 26th October), but there is also a plethora of amazing local apple orchards and cider makers across Yorkshire.

We started our Wassail event with an apple tree pruning workshop, pruning both our own and the community apple trees. Then as the dark fell we lit the fire, warmed the cider, ate some tasty grub and proceeded to celebrate our apple trees in the traditional fashion!

Hopefully this will be the beginning of another great Red Acre tradition!

Old apple tree we wassail thee
And hoping thou will bear
Hat fulls, cap fulls, three bushel bag fulls
And a little heap under the stair

Here we are at Midsummer, … END_OF_DOCUMENT_TOKEN_TO_BE_REPLACED

Some of you may have … END_OF_DOCUMENT_TOKEN_TO_BE_REPLACED